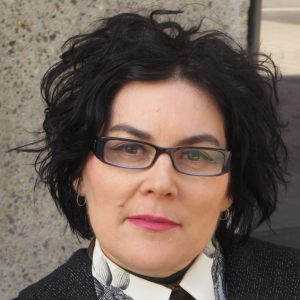 Alana Valentine is co-writer, with Ursula Yovich, of the multi Helpmann-award winning Barbara and the Camp Dogs, first seen at Belvoir 2017 and around Australia in 2019. It has been lauded for its original musical score in the Sydney Theatre Awards and the Australian Writers Guild Awards and won Best Original Score and Best Musical in the 2019 Helpmann Awards.

In November 2019 a song cycle Flight Memory, with composer Sandra France, premiered at The Street Theatre, Canberra. As well as the recent production of original plays Made To Measure (Seymour 2019), The Sugar House (Belvoir 2018), Ear to the Edge of Time (Seymour 2018) and Ladies Day (Griffin 2016), Alana has worked with Bangarra Dance Theatre as dramaturg on Helpmann-Award winning Best New Australian work Bennelong, also Dark Emu, Patyegarang, Dubboo, and ID. Her collaboration with First Nations artists to write and direct a narrative concert Barefoot Divas sold out the Hong Kong Concert Hall in 2015.

Alana was nominated as best director for The Tree Widows, produced by the Tasmanian Theatre Company 2017. Her plays Parramatta Girls and Shafana and Aunt Sarrinah remain on the HSC Drama syllabus and HSC English syllabus in NSW.