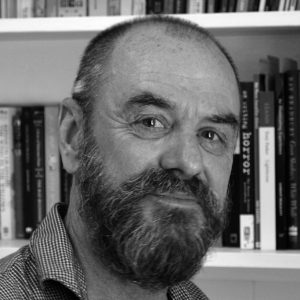 B.P. (Ben) Marshall is a television scriptwriter, ex-remote area nurse, and bikie. He has delivered a hundred babies, was once woken in bed by being kissed by a two-metre goanna, and still has frostbite scars from falling off a mountain in Canada.

He enjoys whisky, nature, science, whisky, art and literature, and is prepared to argue, out in the car park if necessary, that almost all sci-fi writers have it wrong about AI and alien civilisations. He dislikes having guns pointed at him, stitching machete wounds, and people who pride themselves on being anti-science.

He won the 2019 Fantastica Prize for his debut spec-fic novel, The Last Circus on Earth, which currently has a Goodreads rating of 4.7, and an Amazon rating of 5. Considering the protagonist is a murderer, and the plot drags the reader all the way across Europe and Russia to Central Asia, this is somewhat of a miracle.

An awkward introvert, he lives in a remote Tasmanian mountain valley with his wife, dogs and assorted marsupials and monotremes, has an odd passion for slime moulds, and responds well to whisky and dancing to obscure electronic music.