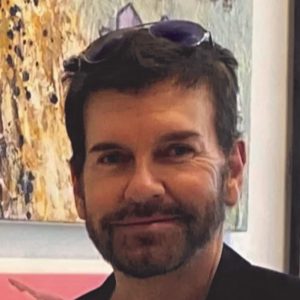 Welsh cast, Australian polished. Darren started making art before he started walking, or so the story goes. He was the quiet one in the family who spent all his time drawing at the kitchen table; his uncle was surprised to find that he even had legs. With his long ‘concert Piano fingers’ however, it was no surprise that he pursued a career as an illustrator.

He has won many national and international awards, including gold at the London International Awards and all three placings, gold, silver and bronze in the same year at the Melbourne Art Directors awards. He has been recognised by Leuzers Archive “Best 200 world-wide” and in 2008 was recognised as the most versatile. He was the first Australian to be given full page credentials in Communication Arts magazine, has illustrated the cover of Time magazine, the LA Times and appeared in Rolling Stone.

He divides his time between Sydney and a beach shack in the Mid North Coast of NSW where he finds most of his inspiration surrounded by forest, sea and river, the inspirational backdrop to the book Willow the Wonderer.