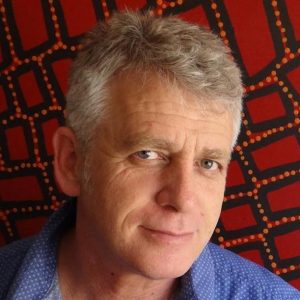 John Thiering has been a visual artist since his first exhibition of paintings in Sydney in 1987. Since 2010 he has been doing live sand art performances. He has performed at a variety of venues including festivals, theatres, cruise ships and corporate events. His work was featured at the opening ceremony of the 2018 Commonwealth Games on the Gold Coast.

As well as his extensive solo work he has collaborated with a range of other artists including musicians, actors, animators, and film-makers. He was honoured to be invited to work with local indigenous artist, Brendan Lugnan and The Saltwater Freshwater Arts Alliance to produce a sand art film based on a Gumbaynggirr dreamtime story.  It was premiered at The Jetty Memorial Theatre, Coffs Harbour in November 2021. Since 2019 he has been collaborating with interactive video animator, Adam Hinshaw to create unique live shows combining sand art and digital animation.