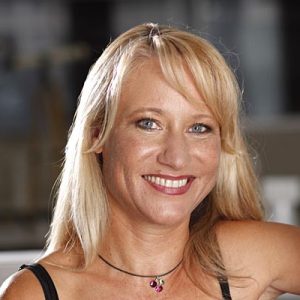 Dr Jonica Newby is a science reporter, author, TV presenter and director best known for her two decades on ABC TV’s popular weekly science program, Catalyst. She has twice won the Eureka Award, Australia’s most prestigious science journalism prize, and is a recipient of a World TV Award.

Originally trained as a veterinarian, Jonica took her love of animals, biology, neuroscience and psychology into the field of science communication. Her first book, The Animal Attraction, charted how our domestic animal companions made modern civilisation possible. It became a TV series that launched her science broadcasting career.

Known for presenting stories with a rare honesty and intimacy, Jonica shared her partner’s cancer struggles for a feature on cancer and exercise, broke taboos discussing the science of the female sex drive, and jumped out of a plane to demonstrate how parts of our brain shut down during danger.

Jonica’s current book, Beyond climate grief: a journey of love, snow, fire and an enchanted beer can, charts her struggles navigating the emotional turmoil of climate change, and provides guidance and emotional sustenance to help us face the uncertainties ahead.