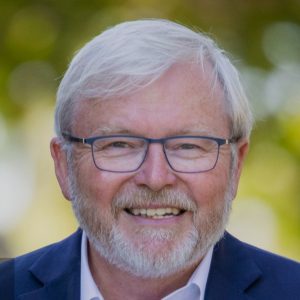 Kevin Rudd served as Australia’s twenty-sixth prime minister from 2007 to 2010 and then as its foreign minister from 2010 to 2012, before returning as Prime Minister in 2013. He is the global president and CEO of Asia Society and has been president of the Asia Society Policy Institute since January 2015. Rudd graduated from the Australian National University with honours in Chinese studies and is fluent in Mandarin. He also studied at the National Taiwan Normal University in Taipei.

Kevin’s latest book, The Avoidable War demystifies the actions of both China and the United States, explaining and translating them for the benefit of the other. Geopolitical disaster is still avoidable, but only if these two giants can find a way to coexist without betraying their core interests through what Rudd calls “managed strategic competition”. Should they fail, down that path lies the possibility of a war that could rewrite the future of both countries, and the world.