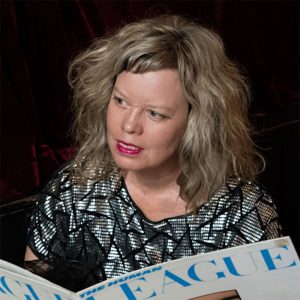 Kirsten Krauth is an author, arts journalist and editor from Castlemaine. Her bestselling novel Almost a Mirror was released in April 2020 by Transit Lounge. Shortlisted for the Penguin Literary Prize, it re-imagines the 1980s Melbourne music scene, where the pop world of Countdown collides with the post-punk scene of St Kilda’s Crystal Ballroom. The Guardian listed it as one of the ‘20 Best Australian Books of 2020’. She is the managing editor of The Victorian Writer for Writers Victoria.

Kirsten is currently working on a podcast that takes an in-depth look at the Australian 80s music in her ‘mixtape’ of a novel, which will feature songs by musicians including Michael Simic aka Mikelangelo, Paul McDermott, Adalita, Richard Andrew and Amanda Brown. She has received a Donald Horne Creative and Cultural Fellowship from the University of Canberra to write and research the podcast, and the first episode – about The Birthday Party’s songs Nick the Stripper and Zoo Music Girl – will be released in July 2021.