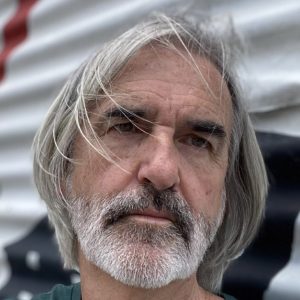 Born and raised in Newcastle, NSW, Mark Mordue divided his teenage years between the coastal steel-town and Nhulunbuy in Arnhem Land. After graduating from university, he established himself as one of the leading rock journalists of the post-punk 1980s era, before going on to a career that embraces poetry, travel writing, award-winning criticism, and a recently acclaimed biography, Boy on Fire – The Young Nick Cave (HarperCollins Australia, 2020)

He is also the author of the travel memoir, Dastgah: Diary of a Headtrip (Allen and Unwin, 2001), two poetry collections: Darlinghurst Funeral Rites (Transit Lounge, Melbourne, 2018; Reprobate Books, USA, 2019) and Via Us: Poems From Inside the Corona (Riders on a Storm/Illuminated Manuscripts, 2020); and the children’s book, The Hollow Tree (Addison Road Community Centre, 2019).

Over the last forty years Mark has been consistently published across mainstream, literary and counter-culture media. He has also established himself the ground-breaking editor of three publications: Stiletto (1984-85); Australian Style (1992-96) and Neighbourhood (2017-2019). Mark the winner of a 1992 Human Rights Media Award and the 2010 Pascal Prize: Australian Critic of the Year.

“I think rock ‘n’ roll taught me to be free in my approach and to draw on anything and everything to do great work. Rock journalism infuses most of the stories I’ve written, and is as much about an independent energy as anything else. I think it connects to a more passionate, poetic and intuitive criticism and my way of writing about people and places. Its lyricism and energy flows through all my work.”